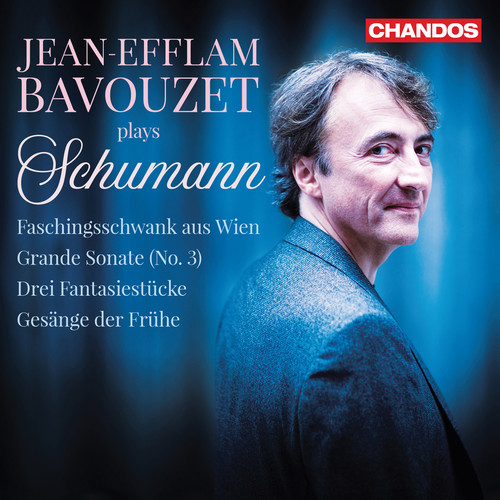 Following his recent acclaimed recordings of Haydn and Beethoven Sonatas, Jean-Efflam Bavouzet turns from the Classical to the Romantic era, and the works of Schumann. The programme is built around the Grand Sonata (no.3). This impressive, large-scale work was originally composed in 1834, later revised in 1853 and eventually premiered (6 years after the composer's death) by Schumann's young protĂ©gĂ© Johannes Brahms. Jean-Efflam first discovered the work though a recording by Vladimir Horovitz in the 1980s, and got to play it to and discuss the work with Horowitz in Paris in 1985. Like Horovitz before him, Jean-Efflam combines elements from both the original and revised versions of the work on this recording. Bavouzet has chosen to couple this with another early work - the "Faschinsschwank aus Wein" - and then the much later work the "Drei FantasiestĂĽcke". He closes with the "Gesange der FrĂĽhe" which were among the last compositions that Schumann wrote before his attempted suicide and incarceration in February 1854. As always with Jean-Efflam Bavouzet's albums, the booklet features an insightful personal note by the performer.